Some text some message.. 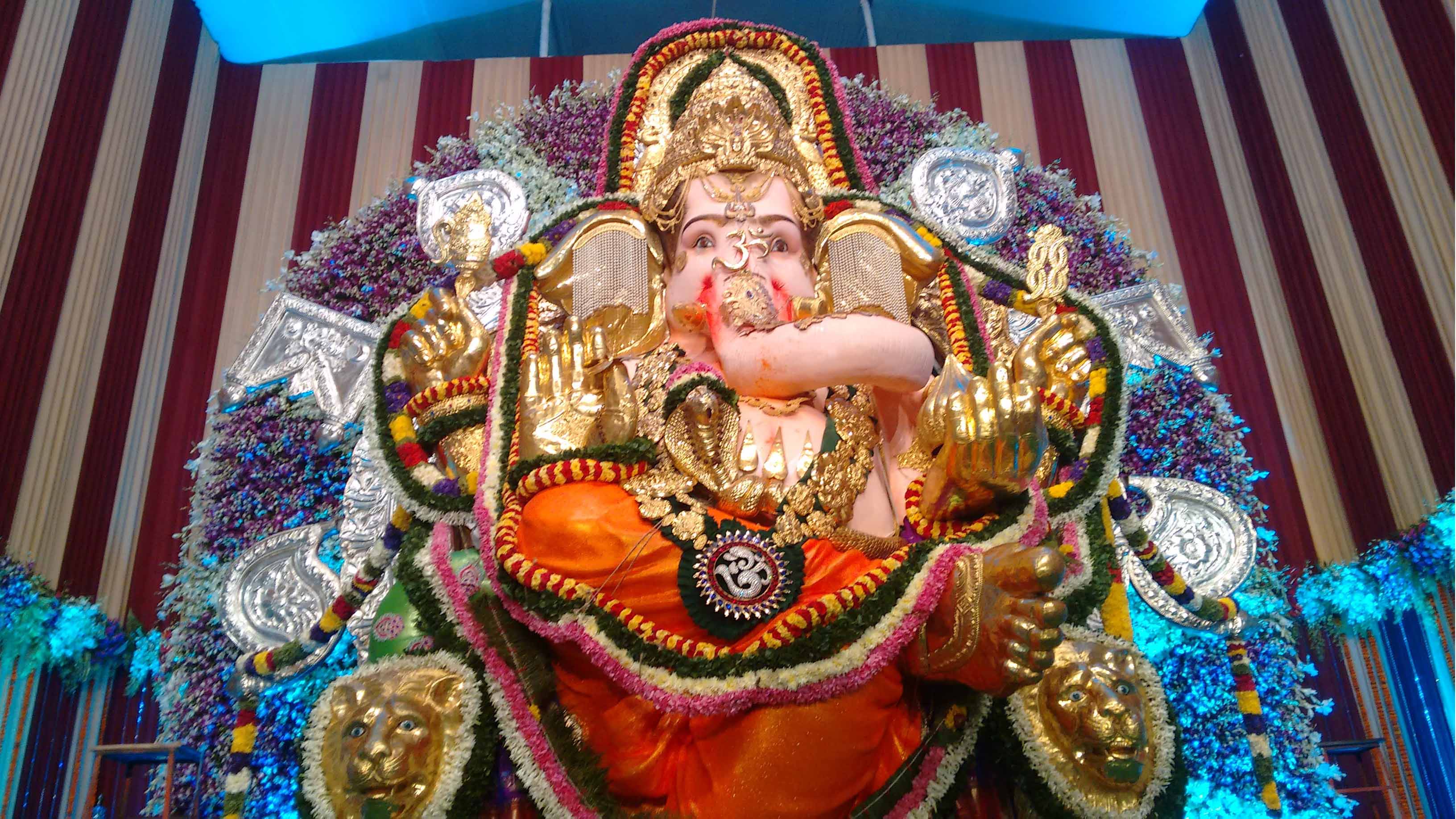 With the Blessings of our Revered H.H. Shrimad Sudhindra Teertha Swamiji, GSB Seva Mandal started our Shree Ganeshotsav in the year 1955. It was only a 14 inch idol to begin with. From that time onwards our Mandal started prospering. Year after year the Ganeshotsav celebrations increased in solemnity along with the size of Maha Ganapati and the bhakta jana with their sevas. It is customary for us to take the Clay from which the Mahaganapati Vighraha is to be prepared along with a coconut to the Maha Chaitanya Vrindavan of H.H. Shrimad Madhavendra Teertha at Walkeshwar Shree Kashi Math for prayers before starting to make the idol. The coconut is then placed in the stomach area of the Vigraha.

In 1979 the Mandal could celebrate the Silver jubilee year with great pomp by adorning the Lord Ganesha with a Silver Crown. Every year after the completion of the 5-day Ganeshotsav some of our members go to the venue of Chaturmas of our Swamiji along with the Prasad which is kept aside on the first day after praying at the Lotus Feet of Maha Ganapati following the Mahapooja. Our number of poojas started increasing from this year considerably.

Our bonding with Shri Kashi Math Samsthan started becoming stronger and stronger. In the year 1986 we attended the 60th Birthday function of H.H. Sudhindra Teertha Swamiji at Ernakulam and we were really thrilled when Swamiji during the Pravachana praised our Ganeshotsav and told the people to visit our Ganeshotsav to find out how people should come together and work during functions.

In 1988, during Vyas Pratistha and Udghaatan of Vyasashram in Haridwar, the Mandal took around 800 Samaj devotees to participate. That was the beginning of undertaking of Unforgetable Yatras for the Mandal. In 1992, Pandharpur yatra, In 1994 Badri yatra, where nearly 6000 people from all over India were accommodated; 150 buses thronged the mountain roads with devotees of Kashi Math Samsthan chanting Jai jaikar. In the same year we had a Dwarka Yatra and the first ever GSB Express, a Special Train was signed with a Salon bogie for Swamiji. It was first time in the history of Shree Kashi Math Samsthan, our H.H. Shrimad Sudhindra Teertha Swamiji visited a place outside India, that was in 1996 a Yatra to Nepal. This was attended by around 5000 Samsthan devotees.

In 1997, our prayers were answered by H.H. Swamiji and we were granted with the Chaturmas Seva to be performed at Sukriteendra Nagar, venue of our Ganeshotsav. This was also a unique occurance in the history of Shree Kashi Math Samsthan. Prior to this all the Chaturmases were held, in either a Math, a temple or at a Teertha Kshetra. It was a pride for the Mandal and we decided that the Maha Ganapati be adorned by a Golden Crown at the August Hands of Swamiji that year itself instead of waiting for Golden Jubilee year as decided earlier. This was a worth seeing scene. The Mahapooja to Lord Ganesh was performed by Swamiji Himself. This year marked the Exponential progression of the Mandal, with devotees from all walks of life swarming at Sukriteendra Nagar. Year after year our Pendol size and shape started increasing and improvement took place. This Ganeshotsav has been a Global Brand because of which people from other Samaj have come to know that there exist people called GSBs. The religious Celebrations are done in a systematic manner and are appreciated year after year by the Police and Press for the disciplined way it is carried out.

In the year 2000 we had the opportunity of celebrating H.H. Shrimad Sudhindra Teertha Swamiji’s Amrut Mahotsav, the seventy fifth year. This was done in a grand manner at our Walkeshwar Shree Kashi Math.

In the year 2001 we were entrusted the task of arrangements for Kalpi Shree Kashi Math opening.

In the year 2002 the task of organizing for Deeksha Mahotsav at Haridwar was delegated to the Mandal. This function was attended by around 6000 Samsthan devotees from all over India.

The year 2003 was a couplet of Yatra, viz. Naimisharanya and Ayodhya.

In the year 2004, the Golden Jubilee year of our Ganeshotsav we were once again fortunate to have the Chaturmas Vrata of our Swamiji to be held at Shree Sukriteendra Nagar.

We were propitious enough to be entrusted upon us the responsibility of the Sahasra Poorna Chandra Darshan Shanti of our Swamiji, held at Konchady in the year 2006. The Mahasabha for this programme was held at Nehru Stadium in Mangalore and was witnessed by nearly 15000 people. The year 2014 was a duet for the Mandal. It was the Diamond Jubilee of our Ganeshotsav and the Shataman Punyatithi of our 18th Ponatiff of Shree Kashi Math Samsthan viz. Shrimad Varadendra Teerth Swamiji, whose Vrindavan is at Walkeshwar Shree Kashi Math. The occasion was graced by the H.H. Shrimad Samyamindra Teertha Swamiji, Patta Shishya of H.H. Shrimad Sudhindra Teertha Swamiji, followed by the Chaturmas Vrata. This was yet another opportunity for the Mandal for Seva Samarpan.

We have also been provident in our Swamiji’s Navati Celebration task being assigned to us, which was held in Haridwar in April 2015. This celebration was attended by over 5000 devotees of our Samsthan & the event was conducted with much pomp and galore. Mandal has been participating every year, for the past over forty years, in Navratra Celebrations of Shree Kashi Math Samsthan at the Chaturmas venue. The Vijaya Dashami being the Foundation Day of Mandal, we get an exceptional Blessing during the Mahasabha on that day. 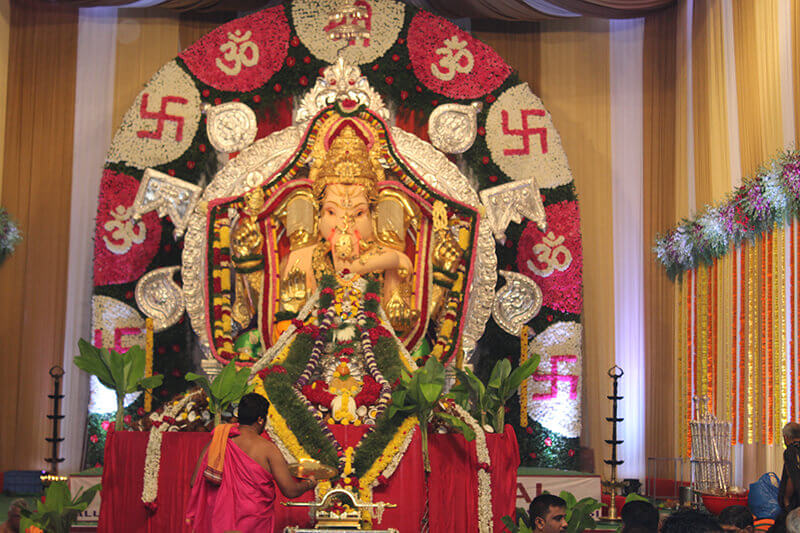 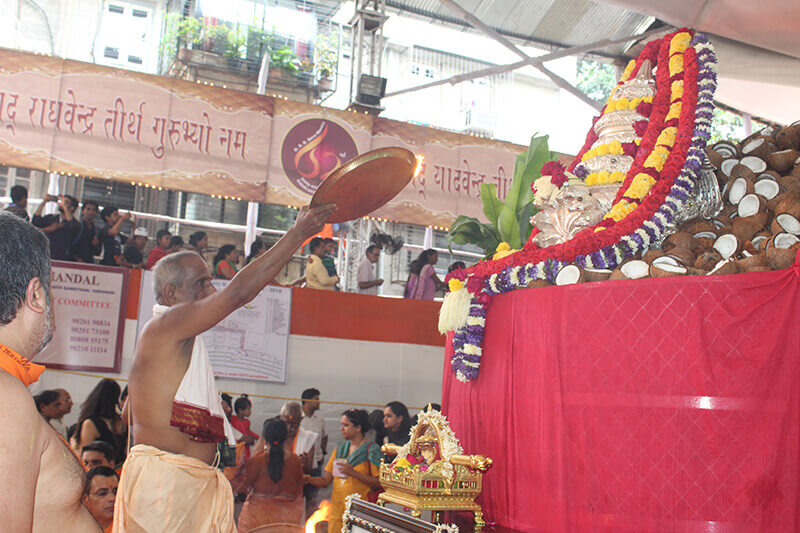 GSB Seva Mandal is a non profit organization registered in India under Bombay Public Trust Act, 1950 in the year 1951. The Trust is renowned for its Charitable and Social activities also conducts various philanthropic activities like Educational assistance and financial assistance to needy individuals based on merits of the case.

Subscribe to our newsletter & stay informed about latest updates and events of GSB Seva Mandal.